The bulk of the services were worked by a fleet of eleven motor vessels.

Rival railway companies, the Caledonian Railway (CR), the North British Railway (NBR) and the Glasgow and South Western Railway (GSWR) at first used the services of various early private operators. The CR failed to attract private ship owners to their new extension from Greenock to the fishing village of Gourock.  They had purchased the harbour at Gourock, which had advantages of a faster line from Glasgow, bypassing the  Prince’s Pier at Greenock, and being closer to the Clyde resorts. The CR began operating steamers on its own account in 1889.

The Caledonian Steam Packet Company (CSP) was formed in May 1889,  with Captain James Williamson as secretary and manager. Nominally an independent company, they bought the ships needed to operate steamer services to and from Gourock. On withdrawal of the Wemyss Bay Steamboat Company in 1890, CSP took over services to Rothesay, Largs and Millport. In the years that followed, there was significant investment in piers and ships.

After years of fierce competition between all the fleets, the CR and GSWR amalgamated with several other railways at the start of 1923 to form the London, Midland and Scottish Railway (LMS) and their fleets amalgamated into the Caledonian Steam Packet Company, their funnels being painted yellow with a black top. At the same time the NBR (and its shipping fleet) also amalgamated with other railways to create the London and North Eastern Railway (LNER), which built the PS Waverley in 1947.

With nationalisation in 1948, the LMS and LNER fleets were amalgamated as Clyde Shipping Services, under the control of the British Transport Commission.

In 1957 a reorganisation restored the Caledonian Steam Packet Company name, and in 1965 a red lion was added to each side of the black-topped yellow funnels. The headquarters remained at Gourock pierhead.

At the end of December 1968 management of the Caledonian Steam Packet Company passed to the  Scottish Transport Group, which gained control of David MacBrayne’s the following June. The subsequent history, bedeviled as it has been by Government interference. Is too complex to go into here.

For an admirable history of Clyde Steamers up to 1900, see: 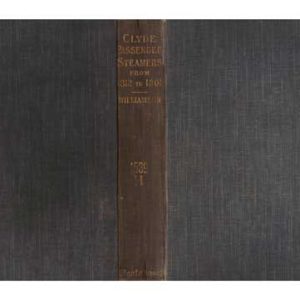