Alfred Owen Williams (February 7, 1877 – April 10, 1930) was a poet, author and a collector of folk song lyrics who was born and lived most of his life at South Marston, near Swindon.  He was almost entirely self-taught, producing his most famous work, Life in a Railway Factory (1915), in his spare time after completing a grueling day’s work in the Great Western Railway works in Swindon. He was nicknamed “The Hammer Man Poet”.

Born in Cambria Cottage in the village of South Marston, the son of a carpenter, Alfred grew up in poverty after his father abandoned his wife and eight children. He became a farm labourer at eleven, and then, when he was fourteen, (1891) he entered Swindon Railway Works, as an apprentice where he was eventually employed as a steam hammer operator.

Married in 1903, Alfred pursued a demanding schedule of full-time work and private study, with a lengthy trudge to and from work each day whatever the weather, contrasting with the extremes of temperature encountered in the Shops. He published his first kind of book of poems in 1909, Songs in Wiltshire, but his health declined and he left the factory aged 37, in 1914.

He may have had little formal education but he was a keen observer. And my word he could write! See  pp 187-205 – a brilliant piece of reportage of the men’s conversation and shouts, interspersed with machine noises, as a red hot billet is beaten into shape. His political and   social views are somewhat confused; at times he seems anxious to embrace the kind of Utopian Socialism preached by William Morris, where all would weave their own cloth, make their own furniture and hand print their own wallpaper from woodblocks. This, overlooking the fact that if the entire population took that course, no one would have time to do anything else. He is also less than fair to the Great Western Railway, one of the better employers of the period which had numerous schemes directed towards the welfare of staff.

Alfred Williams published six volumes of poetry and a series of prose books about his home villages and others nearby, but died in poverty in 1930 in South Marston. Life in a Railway Factory provides a fascinating glimpse behind the glittering façade of polished brass domes and copper capped chimneys of the Dean/Churchward era.

You might find it useful to have this which illustrates many of the shops and machines which Williams describes. The plan will be of particular help as there were few significant changes since his time at the Factory: 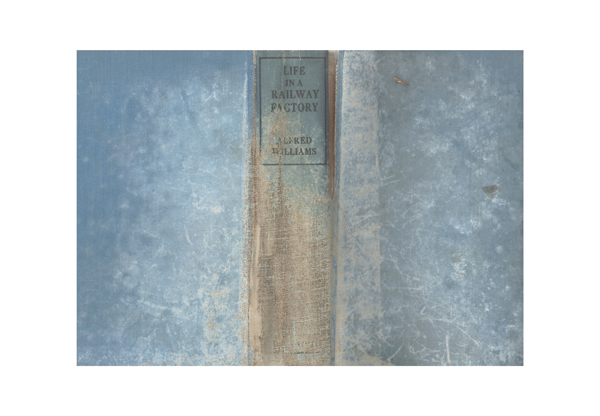