Chapman Frederick Dendy Marshall ( 1872 – 1945) was an English railway historian, best known for his works on the Southern Railway and its precursor companies; on the Liverpool and Manchester Railway and on early railways and locomotives to 1831. He was a member of the Royal Aeronautical SocietyRoyal and the Institution of Locomotive Engineers. He was also the holder of one of the first British driving licences.

Although called to the Bar at the Inner Temple in 1898, he did not practice and During the Great War he was a technical examiner at the Munitions Inventions Department and managed the Ministry of Munitions “Journal.” Over a period ofmany years he had contributed to “The Locomotive” and other technical papers, usually on matters of historical interest, but not invariably, notable exceptions being his paper on “The Motion of Railway Vehicles on a Curved Line,” which shared the George Stephenson research prize awarded by the Council of the Institution of Mechanical Engineers in 1930, and his work on “The Resistance of Express Trains” — the first extensive study of aerodynamics as affecting railwaytrains.  He evolved a patented system of locomotive compounding applied to LNWR 4-6-0 No. 1361 Prospero in 1915 but it is as a railway historian that he is best remembered.

When the LMS approached Marshall to write the text for the official Liverpool and Manchester Railway Celebration Book he at first demurred having just published a Centenary History of the line himself and did not want to produce a “Pot Boiler”. (Would that some later authors in  similar positions had taken the same stance!) However on consideration given that half the LMS book was to comprise histories of its main constituent companies he felt that he could produce something fresh and indeed only one illustration was duplicated in both books.

Given that the LMS had already participated In the Railway Centenary Celebrations for the Stockton and Darlington Railway in1925 it was a little naughty of them to proclaim 1930 as the “Centenary of Railways” although Marshall did attempt an explanation in his introduction.

Although the “Bean Counters” and the Executive Research Office were not yet quite exerting the stranglehold on expenditure which they would later, one cannot help getting the impression that the LMS was rather half-hearted in its approach to the event. Take away the extensive celebrations organized and paid for by Liverpool Corporation, little else remains. 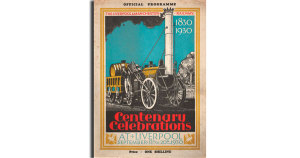