While nominally independent, the presence of a preponderance of London & Birmingham and Grand Junction directors (who were already contemplating amalgamation) ensured that the Chester & Holyhead was firmly under the influence of what would become the London & North Western. When opened it would be worked by the LNWR until absorbed by that company in 1859.

The first sod was cut and the first blasting shot fired at Conwy tunnel on 1 March 1845. By the end of that year, some 5,000 men and 500 horses were engaged in the project and work had begun on several tunnels, at Llandegai, Conwy, Belmont and Bangor. Penmaenbach tunnel was opened in November 1846 amid local celebration.

By May 1844, the Board had agreed to 14 intermediate stations at: Queensferry, Fflint, Holywell, Mostyn Quay, Rhyl, Abergele, Colwyn, Conwy, Aber, Bangor, Menai Bridge, Llanfair PG, Bodorgan and Ty Croes. A station was provided at ‘The Valley’ as a result of a successful petition in 1846. The stations were architect designed by Francis Thompson who also designed the fine buildings for the Chester joint station. The need for several others including Bagillt and Prestatyn was recognised by Stephenson but deferred along with Colwyn and Aber on account of financial stringency. Financial stringency meant also that some stations like Llanfair PG were pretty shoddy affairs. In the 1870s, under the parsimonious reign of Chairman Moon and General Manager Cawkwell it was very difficult to obtain sanction for any expenditure not deemed absolutely necessary, or which would offer a reduction in costs. One bleak winter night, the District Engineer at Bangor was woken in the small hours. “Mr. Smith! Mr. Smith! Llanfair Station is afire!”  “Is it well alight?” “Yes Sir!” “Very well, let it burn!” Smith went back to sleep, secure in the knowledge that money would now have to be found for improvements.

A total of 85 miles of double track railway were built during a four-year period including two impressive bridges at technically very demanding locations. The pioneering design of the Conwy and Britannia Tubular Bridges owed much to William Fairbairn. Stephenson, having celebrated a little too well at a banquet at Conwy, made a speech which sought to diminish Fairburn’s contribution, causing a rift between the two men which led to Fairburn withdrawing from the project, before the Britannia tubes were floated. This little book contains details of how the bridges were built, and also a vebatim account of Stephenson’s offending speech.

Parry was perhaps fortunate that there was no Trades Description Act in force in 1849 when this edition was published. Passenger trains operated throughout from Chester to Bangor, almost sixty miles, from 1 May 1848. But it would be 18 March 1850, before trains ran across the Britannia Bridge to Holyhead.

Unlike some “Railway Companions” of this period which are all topography and little railway, Parry notes all the major bridges and tunnels en route giving the main details.  A well written eye witness account of an exciting time in railway history.

For more about the Tubular Bridges see: 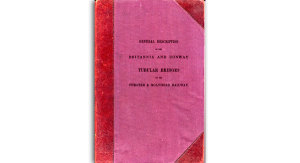