Categories: THE CENTURY OF RALWAYS "MANIA" TO NATIONALISATION, TRANSPORT IN WARTIME, OF SCOTTISH INTEREST, Shipping and Waterways, LINERS

Like most people I suspect, that what came to my mind at the words “John Brown, Clydeside” were the great Cunard liners and majestic warships built in the yard. I had not fully realized the connection with the steel makers Thos. Firth John Brown Ltd. or that these “peaks” were merely the tip of the iceberg- a conglomerate of companies, retaining their own names but owning major shareholdings in each other, and appointing directors to each other’s boards.

As such in terms of vertical and horizontal diversification, this anonymous grouping could rival Vickers-Armstrong or Beardmore. Between them, they could supply the fuel and the iron ore required for making steel, produce the plates castings and forgings for building ships hulls and engines, making boilers, armour plate and heavy armament if required, all without going outside the “magic circle”. It all began in Sheffield, with an ironworks run by John Brown, who managed to get in on the ground floor of steel making, just before the revolution in naval architecture heralded by HMS WARRIOR, started a demand for armour plate. His staple business to start with was sprung railway buffers and springs for railway rolling stock. At around the same time, another Sheffield firm Thomas Firth, began producing armour piercing projectiles.

Brown began diversifying by buying collieries and Spanish iron ore mines to ensure that there were continuities of supply at stable prices. The business attracted the attention of an entrepreneur, Henry Pochin who invested heavily when the company went public, and encouraged others including family members to do so. Naturally, there were seats on the board for substantial investors, and while the business went from strength to strength, Brown, although Chairman, found he could no longer do as he pleased, resigned in 1871, disposed of most of his shares, and set up a rival business a few miles away. This was not a success and he died almost in poverty.

Busineses which were acquired, or a major shareholding held and directors in common included locomotive builders Sharp Stewart and Co. Ltd., Palmers Shipbuilding and Iron Co., Sheepbridge Coal and Iron Co., Tredegar Iron and Coal Co., Bolckow Vaughn and Co.,Staveley Coal and Iron Co., Aldwarke Main and Carr House Collieries. J.& G. Thomson’s Clydebank Shipyard and Marine Engineering works were taken over in 1898, being renamed John Brwn, Clydebank in the process. Although the yard bore his name, John Brown did not live to see his firm become a leading shipbuilder. An exchange of shares and directors in 1904, saw the beginnings of a closer working relationship with Thomas Firth and Co. – full amalgamation would come later. A 50% share was taken in Coventry Ordnance Works, and even a stake in Harland and Wolff was taken, with Lord Pirrie joining the John Brown board.

This a fascinating book, throwing light on one of the lesser known armament cartels, but like too many official company histories it is long on lists of names “Can’t leave old Snodgrass out…” and short on precise dates. 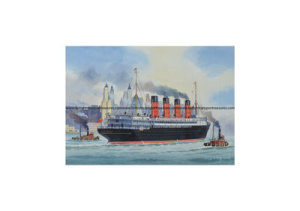