William Evans of Rotherhithe and his Steamships, by Stuart Rankin, 2003. Extract from the Proceedings of the Second Sympopsium on Shipbuilding on the Thames and Thames -built Ships, held at the National Maritime Museum, Greenwich. 15 February 2003. Edited by Dr. Roger Owen [ebook] 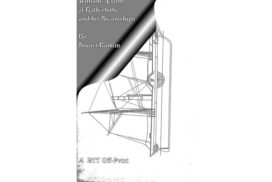 Off-print A4 size, pp.30 13 illustrations in B&W. Originally intended to be one of my “Shipbuilding in Rotherhithe” booklets (and advertised as such on the rear covers) I was contemplating publication, when Dr. Roger Owen kindly agreed to read my draft, and suggested some additional sources of information, and lines of enquiry. These proved so fruitful, that the MS expanded to more than twice its length, and Roger further suggested that full references to sources should be given, as Evans was emerging as a much more important figure in the history of the steamship than had been realised, and an “audit trail” should be left for future reseachers to pick up.

Copy and paste this URL into your WordPress site to embed

Copy and paste this code into your site to embed